The three women looked at me expectantly as they sat on the rubber tubes that were already getting hot in the morning sun. I was the youngest of the group, but I felt a bit like a camp counselor. I was in charge. I was responsible. If something went wrong, it was on me.

“You will need to grab a paddle,” I told them from the shore’s edge, holding on to the boat’s o-ring as it bobbed up and down in the shallow waters.

What was that look on their faces? Confusion?

“We’ve never paddled,” Faith finally said, blonde ringlets framing her petite face. She looked back at the giant oars next to the seat where I would be sitting. “We always go with boys. They paddle.”

“Oh, um,” I stuttered. You just let the boys paddle? Who were these mysterious boys that appear when one needs to paddle? “Well, today we don’t have any boys. So, today we get to paddle.”

They did not look amused.

They grabbed the paddles and settled back on their seats.  I nodded at them reassuringly as a pit filled my stomach. What in the world was I doing? I couldn’t take these three women down the river by myself.

This is a common issue with me – finding myself in an uncomfortable situation because of brazen assumptions that I can power through anything. Generally, I get into these predicaments alone – kayaking down a tumultuous river, getting lost on a trail run, or skiing down particularly steep slopes because I had neglected to look at the map of the mountain and simply had no other way of getting down.

But today, I had others with me. I assumed I could borrow my friend’s boat, load it with a few college friends, and easily traverse the river as I had done innumerable times as a child. This was not going according to plan. I plastered a smile on my face and determined that a wee bit more courage was all that I needed.

I shoved the boat into the water, climbed over the rubber tubes, and settled myself in the captain’s seat between the big oars.

“Okay, ladies,” I began, hoping the quiver I felt in my voice was not audible. “First things first: if you fall out, make sure you hold onto your paddle.”

Six wide eyes stared back at me.

“You’ll be fine,” I reassured them. “Float with your feet pointed down river so the bottom of your shoes hits the rocks first.”

I taught them how to pull each other back into the boat, the swimmer placing their back against the side of the tube, and the rescuer leveraging their knees to pull them up by their life jacket.

To all of these instructions, they nodded their silent acquiescence.

“Now for paddling commands,” I continued. I called them out one-by-one: all forward, left forward, right back, left back, right forward, all back. Their paddles barely splashed in the water as I yelled out each command. I felt panic as I heard the rumble of rapids around the next bend.

“Great,” I declared with an unconvincing smile. “All forward.”

The boat slowly crept forward. I attempted to dig the heavy oars into the water to propel us onward.

As we hit the first set of ripples, the boat felt like a tank. The ripples turned into waves, and my arms burned with the effort of moving the boat around the large boulders. As I shouted out commands, the boat barely moved.

The first rule of maneuvering the water is controlling your vessel’s speed. As long as you are going faster, or slower, than the current, then you can control your trajectory. When your boat is floating with the current, turns become significantly more difficult. And we were going with the current, missing all the big waves and bumping into the rocks along the way.

As the waves turned to ripples and then to calm water again, I realized just how stuck we really were. We had shuttled the trailer down to the bottom of the run, so we were committed to the next several miles of river. My arms were already tired, the girls looked kind of miserable, and we had hours of rafting left to do.

The air felt thick with silence. I thought back to the many times I had rafted with other guides who used these calm waters to tell tales of taking their boats over waterfalls, epic trips where people fell out or swimmers seemed lost in the waves before popping up downstream. What could it hurt?

“So there was the one time I went rafting down in Gold Hill,” I began. I told about Travis, a buddy of mine who had been new at the whole captaining thing. So, when he told us to hunker down and hold on, his wife, Trea, and I both decided we needed one more good paddle. The boat went over the top falls head on. Perfect execution. When we leaned over the second larger falls, the boat seemed to be well-centered again. We were not. We hit it the pool of tumultuous whitewater at an angle. The boat jerked high into the air, knocking both Trea and me into the cold, tumultuous waves. I caught the rope on the side of the boat, while Trea got swept away into the current. I heard a frantic scream from Travis as he scanned the water’s surface for Trea. Seconds later, which certainly felt like agonizing hours, she appeared several hundred feet downstream, completely unscathed.

My boat of paddling rookies stared at me in silent horror.

“So we were good, you know. I mean, I gave Travis a really hard time about only hollering for Trea when I was swimming too, but what are you going to do? Part of rafting with married couples, I guess.”

I rolled my eyes. They gave me smiles at that.

“We’ve got some more ripples coming up,” I continued, nodding my head toward the unmistakable sound of churning water around the bend. “All forward!”

The boat lurched forward as their paddles hit the waves. Apparently, my story was doing more than just providing a little entertainment during the calm water portion of the trip. Suddenly, these women were paddling as though their life depended on it.

As I dug the oars in, I could easily maneuver the boat around. As we hit the next set of rapids, we began chasing the big waves, slipping around the large boulders to ride down the large wakes on their edges. We hit the waves perfectly, the nose of the boat dipping down and up, pouring water over the front of the boat, drenching the girls as they screamed and laughed.

As we reached the next spot of still water, the girls were elated.

“I almost fell out, but I tucked my foot in the side of the tube like you said,” Faith grinned at me.

Whether by design or coincidence, I realized there was something that invoked a bit of bravery from telling those stories of rafting disasters. All our fears had been replaced with a spark of adventurous curiosity.

With each new set of rapids, I felt the strength of their paddling strokes increase, giving us control to hit the waves with precision. The still water spaces between the ripples were filled with the telling and retelling of the best parts of that last set of waves.

As the afternoon wore on, the high walls of the canyon blocked out the warm sunshine, and goose bumps appeared on our weary arms.

Faith turned from her perch in the front of the boat, her blonde curls wet against her beaming face.

“We’re never going to let the boys paddle for us again,” she declared. “That was so much more fun.”

I grinned as we paddled the boat down toward the final takeout. 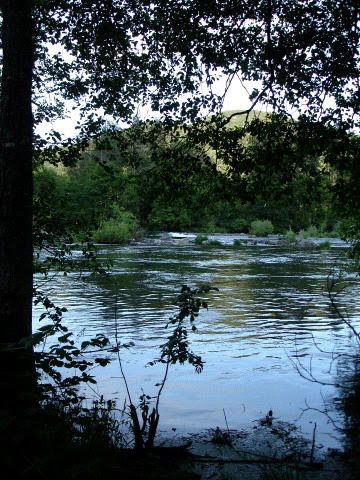